In January of 2015 My family and I spent a couple of weeks holidaying in  the North Island of New Zealand covering 2500km going around the coast heading south from Auckland and then up the middle and this allowed me to finally realise a long held ambition to check out the kayak fishing mecca that is the Coromandel Peninsula.

Those of you who watch the Kiwi fishing shows like Big Angry Fish will already know of its reputation for Snapper and Kingfish and whilst researching a previous visit to NZ on the Kayakfishingnz forum I heard about Rob Fort of Coromandel Fishing Adventures who at the time offered guided kayak fishing and runs a specialist Kayak fishing store / Kayak hire business and makes videos and writes for the Kiwi fishing mags.
Unfortunately that trip had already had all the accommodation booked and I was not able to get over to Coromandel so this year when we headed back to NZ it was top of my wish list.

Coromandel is any easy 2.5 hour drive south east from Auckland at tourist pace along the less direct coastal route and the drive in is spectacular with green rolling hills dotted with sheep giving way to a narrow coastal road alongside rocky beaches that often climbs over very steep and winding routes over hills.

The last section of road along the peninsula from Thames to Coromandel is worth going for in itself featuring cliffs on one side and a sheer drop into the ocean on the other with the sealed surface going right to the edge and few barriers and huge Pohutukawa trees with their bright red bottle brush flowers growing out of rock faces . 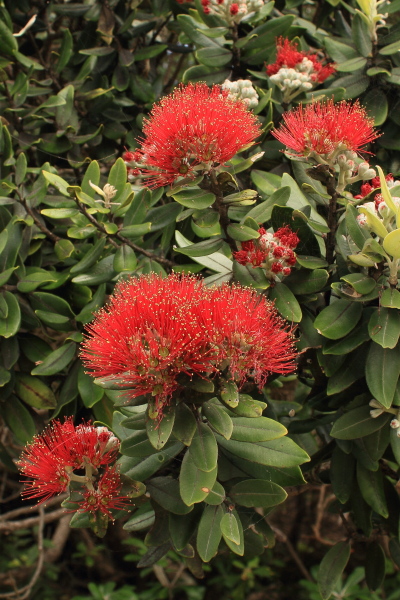 The coast is dotted with a number of small villages each with a boat parking area and over the beach boat launching. 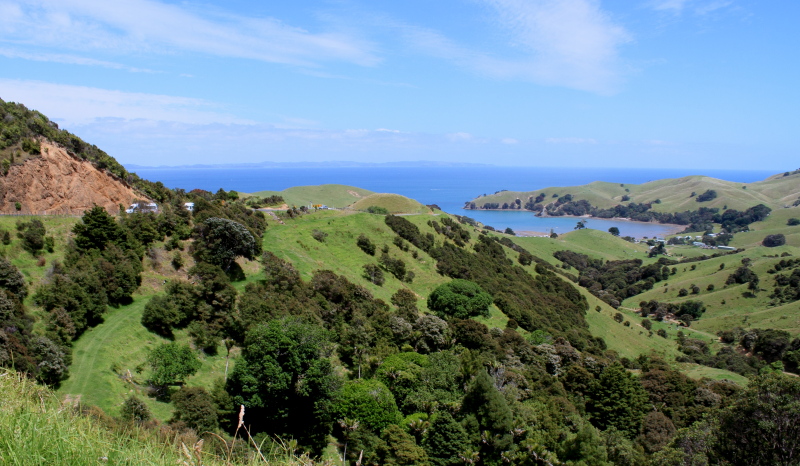 Driving over the last few hills towards Coromandel .The Mussel farms further out in the Firth of Thames are heavily targeted by local charter boats.

A few km short of Coromandel is Rob’s store which is hard to miss with the kayak and paddler on the pole. 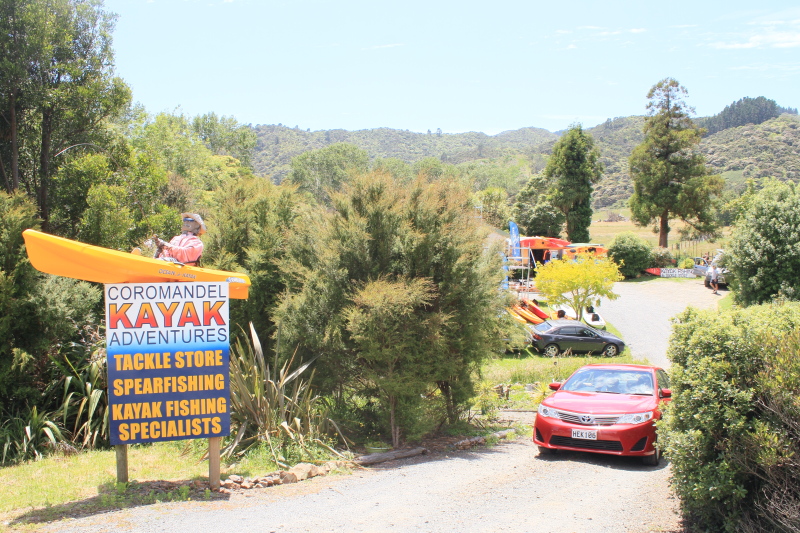 We called in so I could pick up some soft plastics and book a kayak to hire for the following day .With my usual impeccable timing I have turned up at the busiest time of the year and Robs flat out loading hire kayaks onto trailers to be delivered to various spots for tourists. Rob say no problems give him a call in the evening and he will sort me out with a fully set up kayak delivered to a launch spot for the next day. 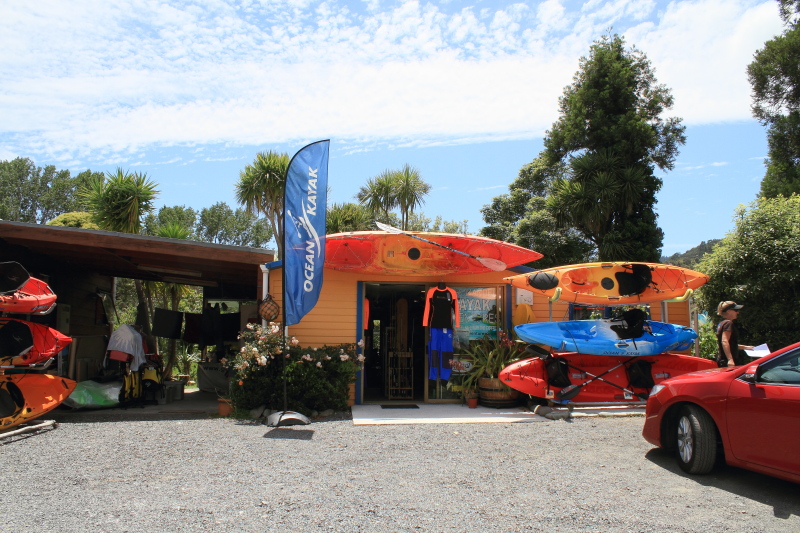 I pop in to check out the store and meet Robs partner Janet who also is a yakfisher and find it has a good selection of the latest Gulp ,Z-man and Halco lures and a good range of jigs along with rods and reels and all the gear you need to rig and fish from a Kayak . One thing that immediately caught my eye was a fish finder cover / sunshade that Rob has designed and had made.
So after picking one up to suit my Humminbird 798 and couple packets of the current hot soft plastic 4 inch Gulp Jigging Grubs in smoke and peppered prawn and some 3/8th OZ jig heads I head out to check out the various Ocean Kayaks on display .The Prowler Big game 2 took my fancy due to its great seat and all the rigging boards included .What a beast! 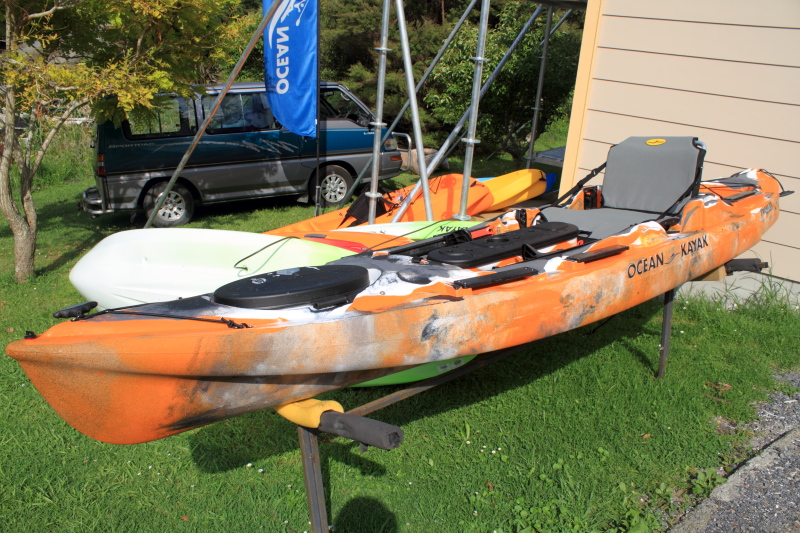 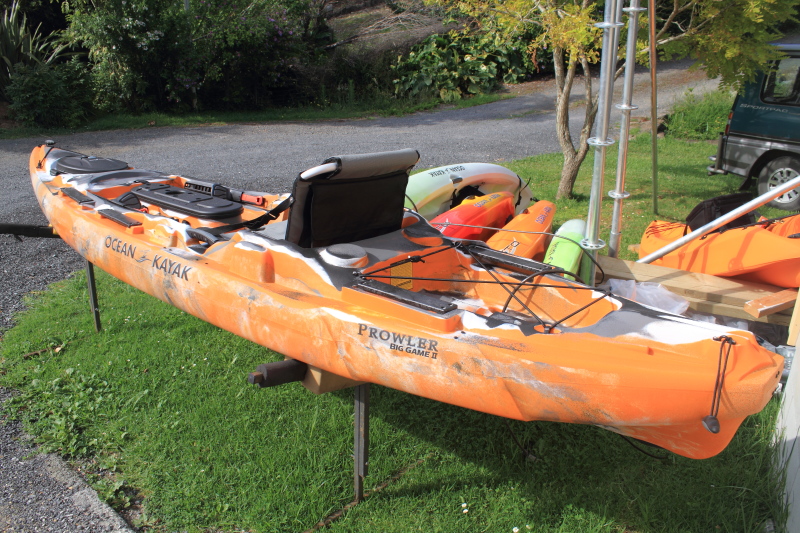 Having thoroughly tested the patience of my wife and kids it was time to head into town for some lunch .I spotted this heavily modded kayak outside the local pub. I think it had some outriggers sitting inside the cockpit ? Check out how heavy duty the aluminium brackets are…Would love to have seen it fully rigged and on the water. 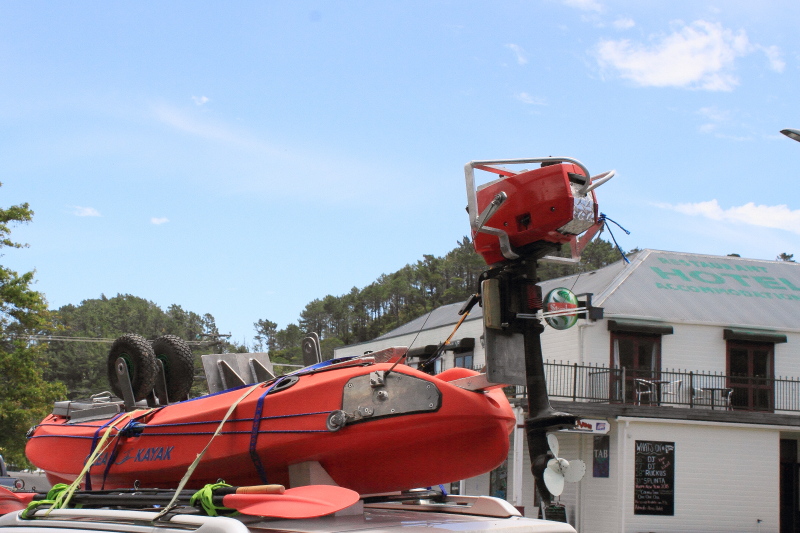 We checked into the Harbour View Motel and later that afternoon I took my son out on the flats out front of the motel in one of the two SOT kayaks the Motel had just bought for the guests to use.
The lower part of the peninsula has extensive mud flats lined with mangroves in all the bays but once you go north of town there are rocky beaches and small rock outcrops and islands . The Mussel farm racks that are very popular to fish are out past the headlands. The amount of small boats fishing was amazing with all the little boat ramps every few KM having 40 odd cars and trailers parked.

When I contact Rob the next day he has great news for me .Rob when he sells a Kayak includes an on the water lesson and Craig who has just purchased his first kayak an Ocean Kayak Trident is going to meet Rob at Colville 26 km further up the coast that afternoon and then going to head even further up for a fish and I can come along .Whilst the fishing around town is good its much better further up where the water is clearer and deeper and far less fishing pressure. I am dropped of at Robs store at 3 in the afternoon and after being introduced to Robs son Logan we are soon loaded and heading north .We meet Craig in Colville and head off past Papa Aroha which is a famous local yak fishing spot with number of rocky islands just off shore and keep going up an unsealed road until we reach a rocky beach. 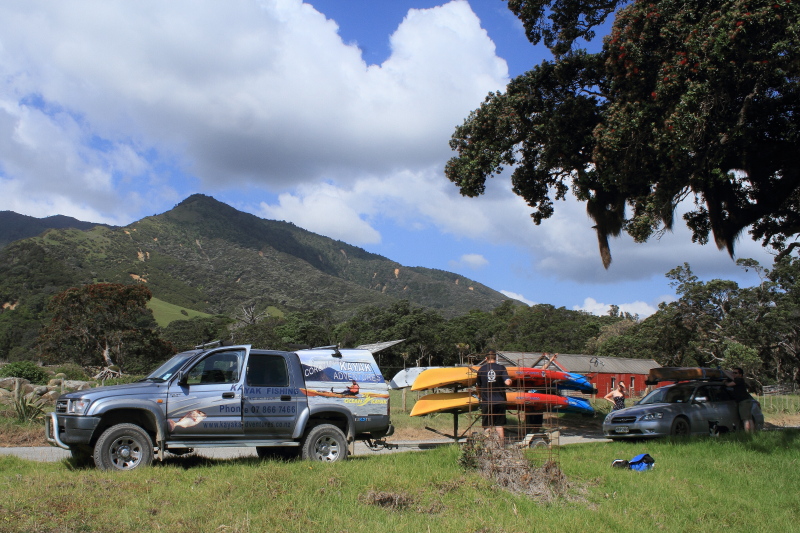 Rob and Logan soon have the yaks off the trailer and rigged .The kayak I have hired, a prowler ultra 4.3 is fully kitted with fish finder ,rod holders ,anchor trolley, PFD, dry trousers if wanted and sea anchor. 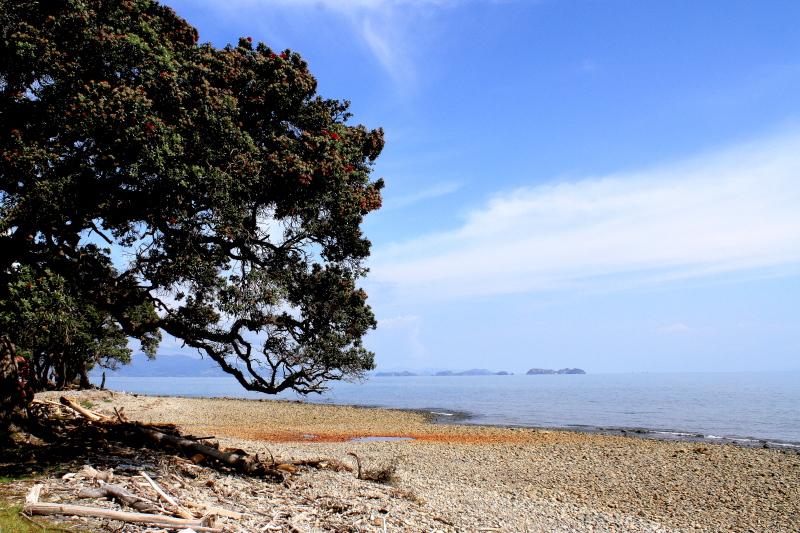 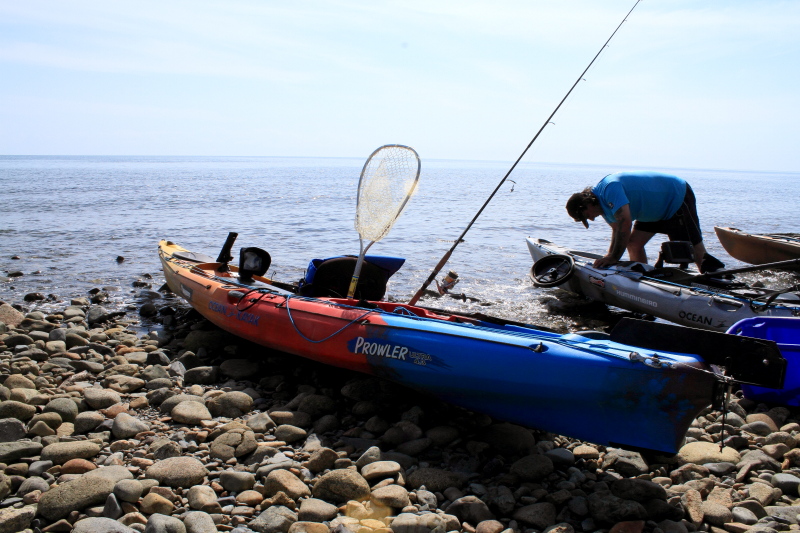 I follow Logan out whilst Rob introduces Craig to his new ride and start getting my head around paddling instead of peddling a Hobie for the first time in about 3 years. 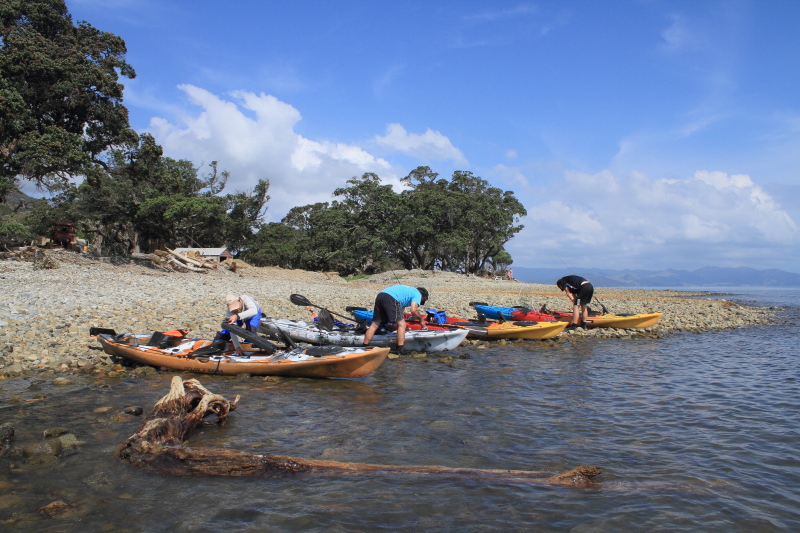 Ain’t that pretty! Even later when I moved out to about 8m of water I could still see the rocky bottom and clumps of sea weed perfectly. 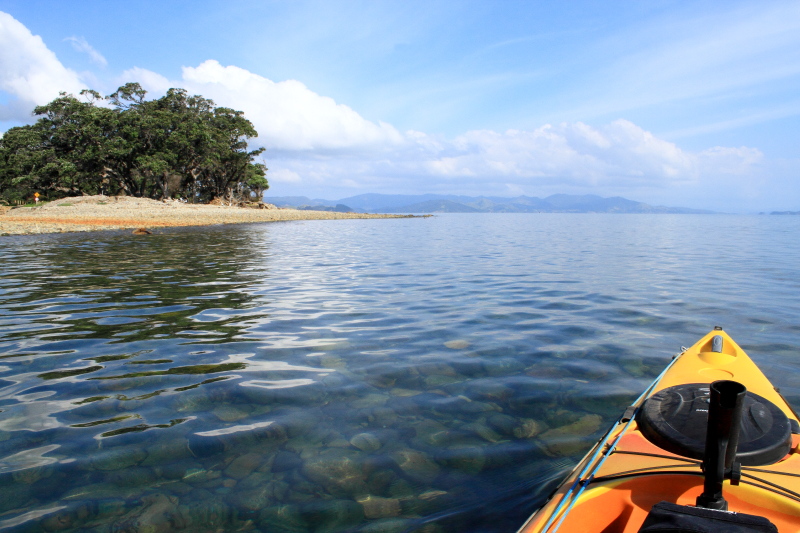 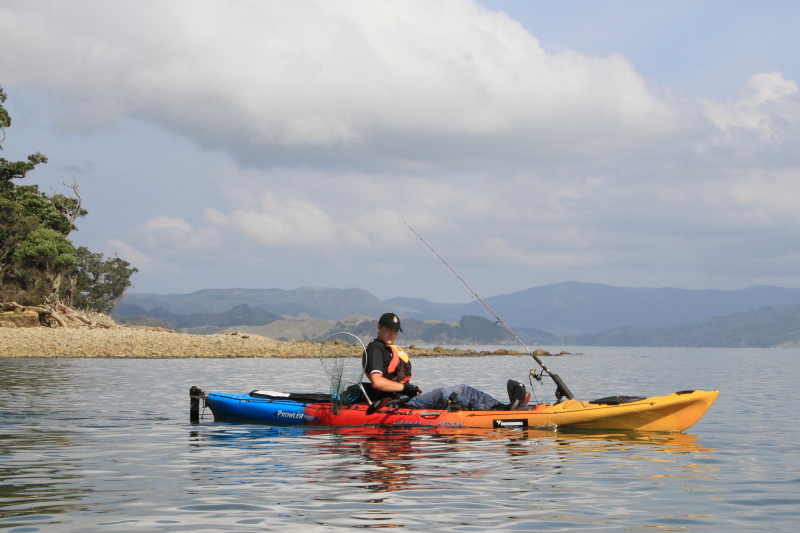 lesson complete Rob and Craig head out to join us .Craig who had never Kayak fished before took to it like a duck to water .He and his partner have actually travelled and worked in Australia and the outfit he was using was his bream outfit from when he caught the bream luring bug. 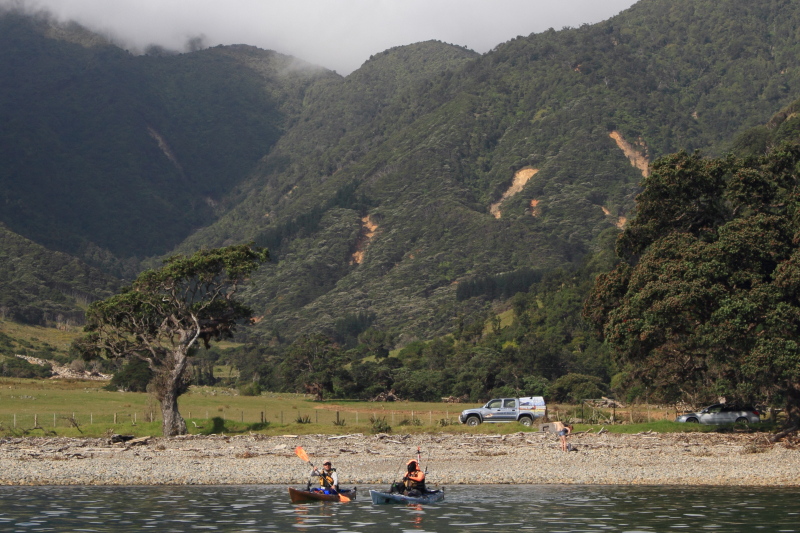 We had only been going a few minutes when we reached about 14m of water and Logan scores the first fish of the day a modest snapper and a few minutes later Craig has opened his account. 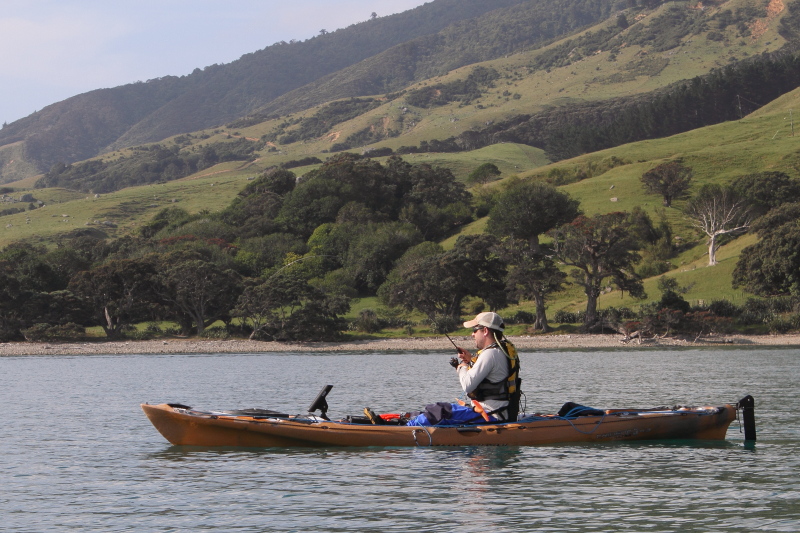 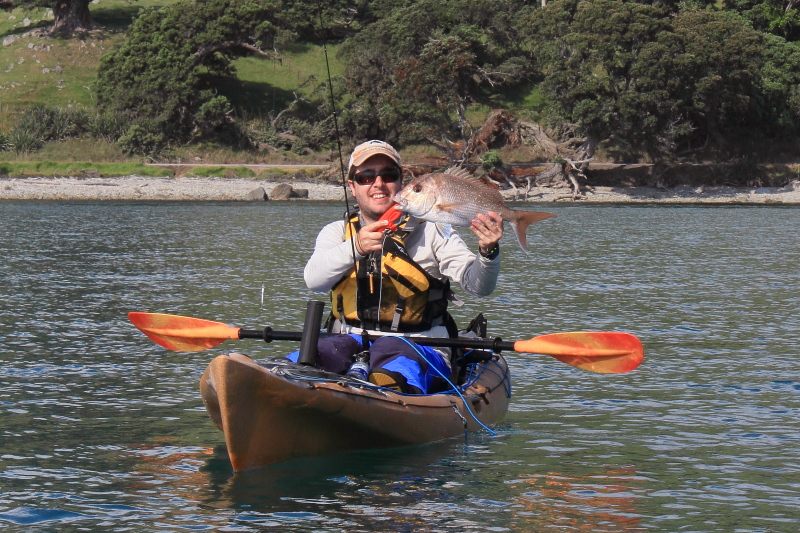 A few minutes later after Logan and Craig have added a few more small snapper to their tally I hook into something that’s obviously not a small snapper and after a short fight up pops this lovely John Dory which went 57 cm and 2.56 kg .My first Yak caught fish in NZ and a new species for me .Well chuffed! 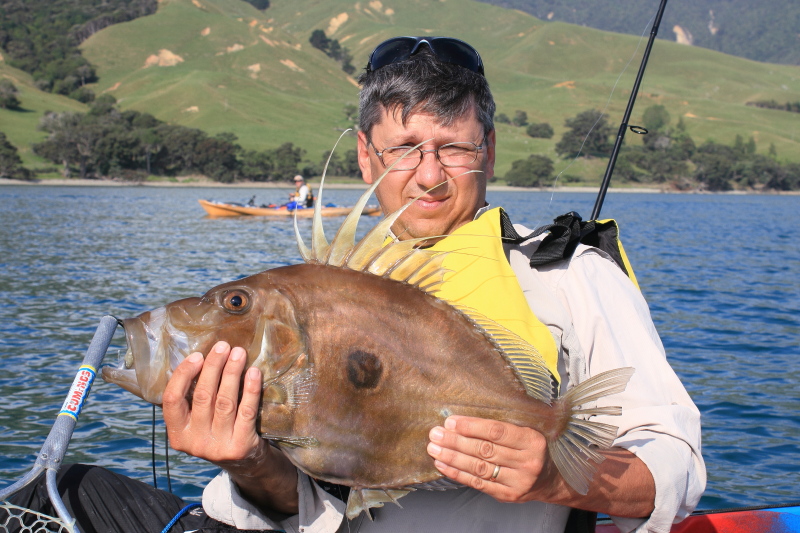 Rob suggests we work our way north and further out towards 20m of water and sure enough the fish finder display really starts to light up in earnest and we start landing a steady stream of snapper often hitting the Gulp Jigging grubs on the drop. 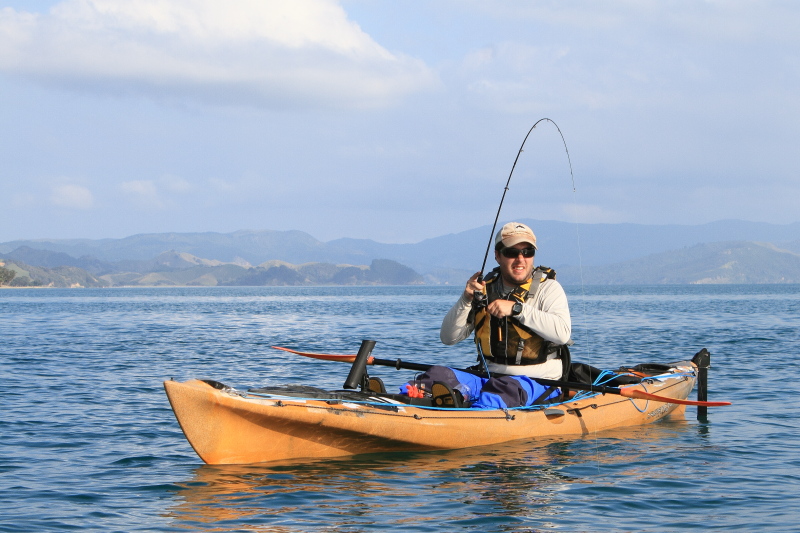 Robs been getting into the action as well and switches to a slow fall jig with good results .Rob had caught a 25lb snapper here the week before. 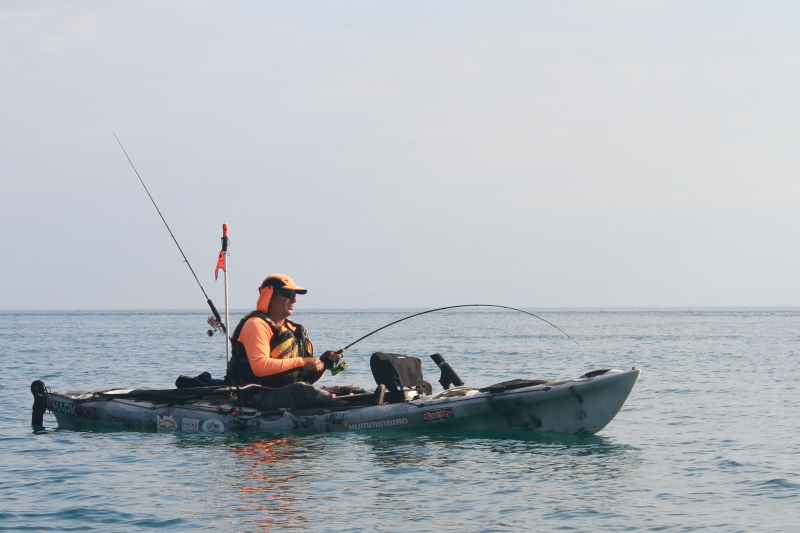 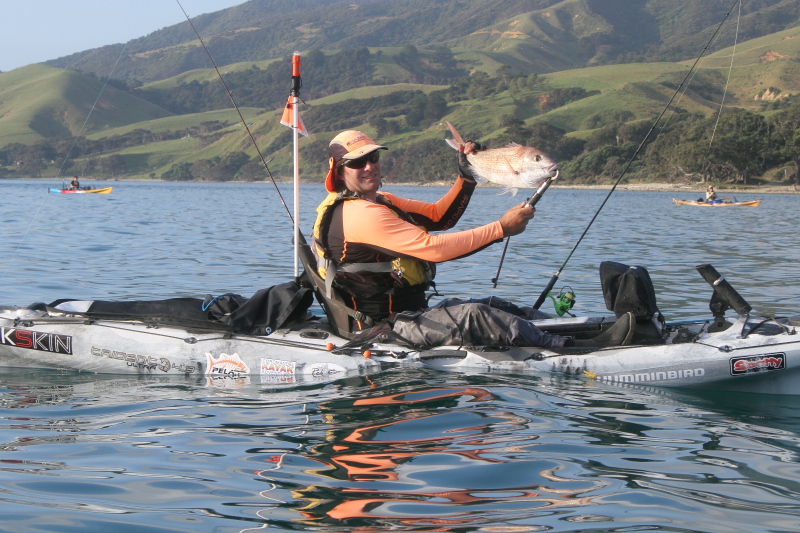 Craig has been having a ball with this fish probably his best for the day where he caught and released over 20 snapper on his first trip . 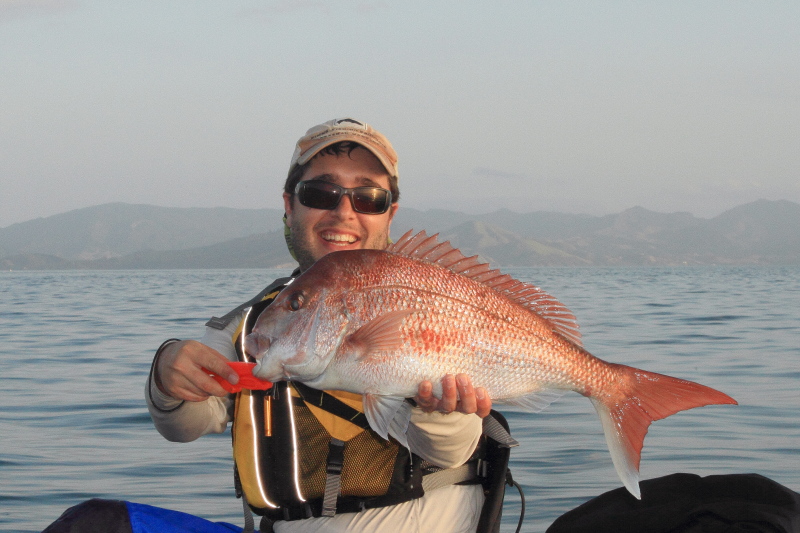 Robs had us stream our sea anchors and its holding the drift beautifully and with the tide coming in and the sun setting we are drifting through big schools of bait with fish holding underneath . 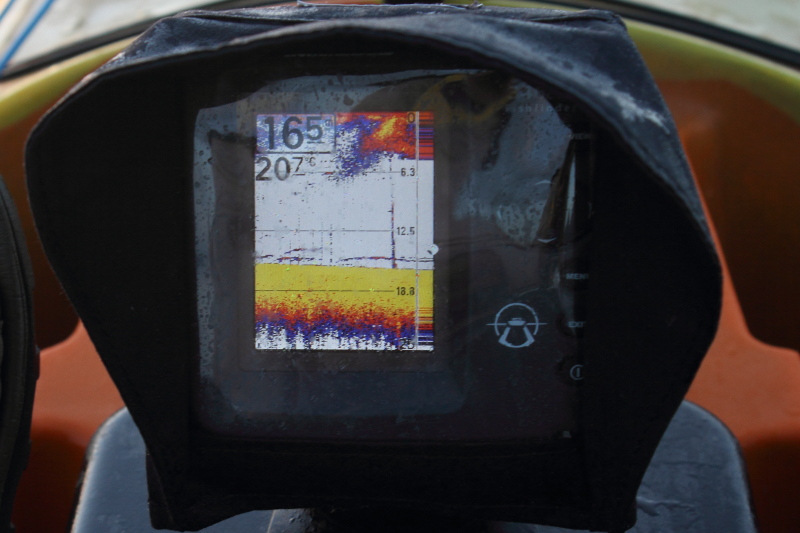 Amongst the hoards of pan sized snapper are some much bigger models and I drop a couple of fish which are obviously in a different class so I swap out the standard jig heads I am using for circle hooks and ball sinkers and start getting really nice hook ups with the fish neatly pinned in the jaw but fail to hook snapperzilla. 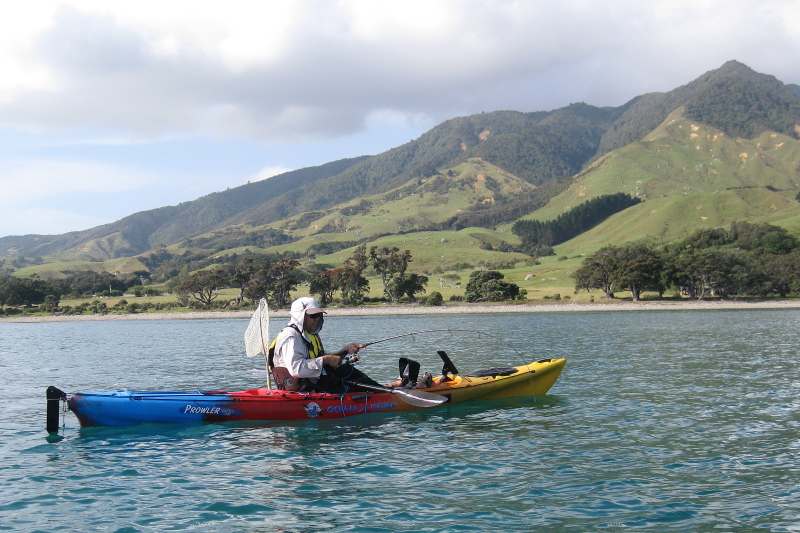 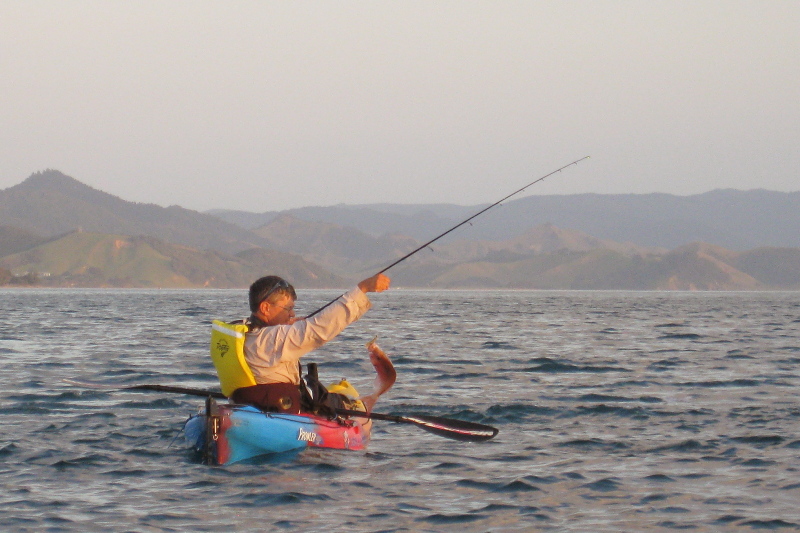 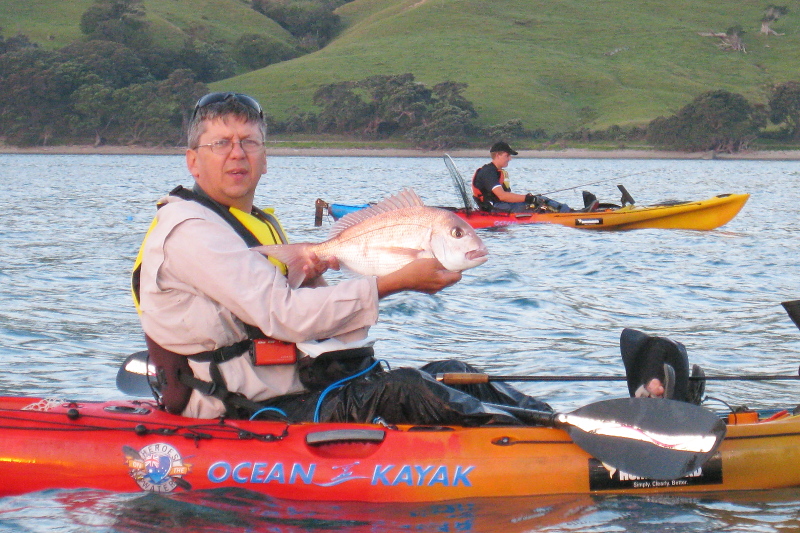 With the sun well and truly set we start to head back but the sounder returns just keep getting better and after several stops for one last cast we run out of light and its fully dark whilst we load up and 10 pm before I am dropped off at the Harbour View Motel. 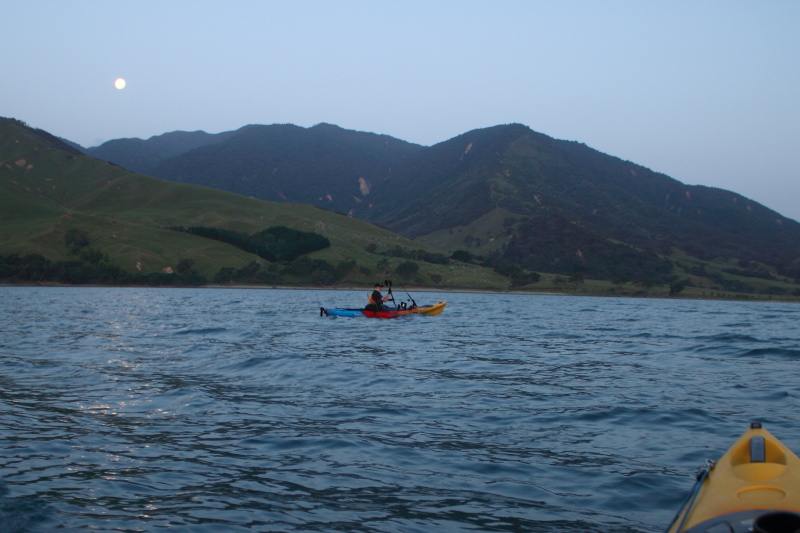 Looks like I am going to have to come back to get that monster Kingfish .Whilst Rob does not guide anymore due to increased regulations he does still offer Mother ship kayak trips to the numerous off shore islands and I will be definitely adding one of these trips to my bucket list.

Thanks to Rob ,Logan and Janet for their Hospitality and a great afternoons fishing .I Cant recommend a trip to Coromandel highly enough to anybody who is touring NZ.